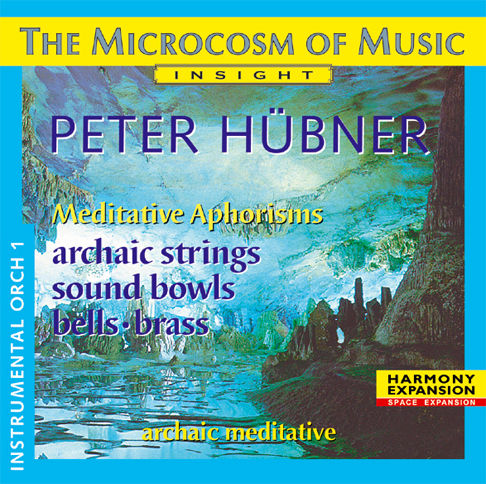 The Microcosm of Music
Instrumental No. 1


CLASSIC-Life: There is a group of 20 pieces of work, the so called “Meditative Aphorisms”, which are to give a special insight into the microcosm of music – if I am right. You also name different spheres.
Can you tell us something about this?

PETER HÜBNER: These pieces of work mainly give an insight into the tonal family relationships within the microcosm of music. We can learn a lot from this.
What we know in our human everyday life, the different generations – great-grandparents, grandparents, parents, children, grandchildren etc. of both sides – can also be found in the microcosm of music.
Only that in the microcosm of music, there is always one generation that has the final say, and the other generations – the further they are away from this generation – have less and less to say, and/or appear more and more faintly. In the example of the tone with its “overtones”, we see the corresponding: the so-called overtones, more distant from the fundamental tone, appear more and more faintly.

There are generation problems everywhere in life. The greater the gap is between the generations, the more these problems become evident – the more difficult it seems to get on with each other.
Who is right? – is the question always asked. And each generation claims to be right. The older ones claim that, due to their old age, they have more experience, and that is why they should be right. And the younger ones reply that they have more original creativity, and that for this reason they are equally entitled to be right. We all know these arguments, and our instinct tells us: well – it must be like that, it has always been like that, and it will be the same in future.

But if the observer now turns around, he again believes to see the grandfather in the back, whom he previously regarded as the grandchild, and in front of him the grandchild, whom he previously considered to be the grandfather.
We always think that all developments only move from the past into the future.
The microcosm of music teaches us that this is a biased prejudice, resulting from the observer’s view and/or point of view. But the reality can also be vice versa.

The natural problems of the generations run through our daily lives. And the reasons for this lie hidden in the existence of space and time, and not at all in the competency of people – that is what the microcosm of music teaches us. But a harmonious togetherness can be learned, and it concerns the natural intelligent attitude towards space and time in our thinking.

The key to harmony between people is thus founded in the consciousness of the individual: in his ability to handle space and time in a natural way: to observe natural space-time-orders, to respect them and on no account to ignore them.
This is what the microcosm of music teaches us – and out of this results the revelation and/or knowledge of the laws of harmony of the microcosm of music.

In those “Meditative Aphorisms” with the general title “Insight into the Microcosm of Music” I have introduced those space-time-shifts, and thus the generation problems in a systematic order, and have shown them as a natural phenomenon of creation.

And in sphere 7 with seven generations under the roof of an aphorism we are very much reminded of the sounds of atonal music of the avant-garde – whilst sphere 1 reminded us of simple classical music. In accordance, the other spheres lie in between, partly closer to folk-music, and partly closer to the music of the so-called new toners.

These aphorisms all clarify further the space-time-conformity to natural laws, which we find in the microcosm of music. That is the reason why, in these specific compositions, I have given all generations the same right to vote – as is the aspiration in a democracy.
But we can see that this kind of equal democracy is not a natural phenomenon, and does not function harmoniously if it is not joined in the structure of a natural hierarchical order.

Thus, in these “Meditative Aphorisms” in totally different orchestral line-ups I wanted to introduce the space-time-shift as such, and to show that space and time play a major part in natural harmony: that they can develop, preserve but also destroy natural harmony, and accordingly, the feeling of natural harmony.

What can we learn from this?

First of all, in these aphorisms we can get to know the disturbance of natural harmony by space-time-shifts, i.e. the natural basis of all problems which we nowadays encounter between people.
Listening reveals to us that the tonal deviations and/or dissonances between neighbouring generations are only of a minor nature, and increase with further generations.

There are always tonal connecting points between generations. The neighbouring generations have more tonal connections – the more distant fewer. From this insight into the microcosm of music, and the natural family relationships, the whole field of “Music and Education” finally grows.
These “Meditative Aphorisms” reveal archaic dealings with the phenomenon ”Harmonics” – as do the “Zen-Symphonies and Hymns”, as well as the symphonies and hymns of “The Great Stream”.

”The Art of the Feminine”, the “Hymns of the Dome”, the “Violin Concertos”, the “Piano Concertos”, the “Metamorphoses” etc. show the solution of the European classical musicians for the phenomenon of natural harmony – one would like to think, more academic dealings with the space-time-shift – in contrast to the archaic dealings, as we also find in the laws of harmony of the microcosm of music in exactly the same way.