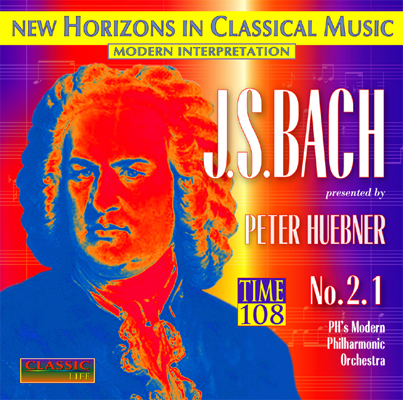 
Peter Hübner speaks on his INTERPRETATIONS OF JOHANN SEBASTIAN BACH


Bach’s works are among the most sig­nifi­cant musical creations known to classical music literature.

I’m saying nothing new here, and this statement is a well-known tune – sung even by those who know nothing what­so­ever about music and only parrot others to seemingly enhance their own public image.
But those who, as musicians and con­duc­tors or singers, treat Bach’s works with serious reverence will know what I mean.

We have to bear in mind that Bach, truly a musician’s musician, had to eke out his living by performing publicly with his band in a coffeehouse twice a week. Thus it is no coincidence that after his death, his wife died in the poor house.

Like every other great composer of se­ri­ous classical music, Bach, too, had to face great to utmost resistance by the mu­sic experts of his time and generally had to organize and finance the per­form­ances of his works by himself.
He placed the highest demands on his musicians and never compromised, which makes it easy to understand that with a very limited number of willing mu­si­cians – whom he generally had to pay by himself – putting on performances was not an easy task at all.

That he was at all able to create such out­stand­ing works under such cir­cum­stances, must be considered a miracle, and something we find to be the case as well with Mozart, Schubert, Beethoven, and even Brahms and Wagner, who were in very similar situations.

He had only very limited resources avail­able to perform his works.
Thus, when modern-day musicians un­der­take to perform the works of this great master of music as “authentically” as pos­si­ble – they understand that in gen­eral this means, above all, keeping the in­stru­men­ta­tion limited to the modest and even sparsely manned ensembles Bach was able to muster and for which he had to score/orchestrate.

One has to be very clear about Bach’s limitations arising solely from his fi­nan­cial situation: Bach was unable to afford more.

Especially polyphony and the art of the fugue, masterfully controlled by Bach, offer room for entirely different in­stru­men­ta­tion dimensions for orchestra and choir: here one could still find a cham­ber-mu­sic-like sound structures situation even with hundreds or even thousands of singers and musicians participating.

This is, after all, the great advantage po­lyph­ony has over homophony, in that it of­fers the possibility for structurally fine musical ramifications along with a cor­re­spond­ingly complex expressiveness.

It is my desire to try to provide the mod­ern listener with an inner access to Bach’s music, and in particular to his high immanent achievements which reveal his good-natured character to us; for judg­ing by the content of his music, Bach was in no way the kind of “ice-cold mu­si­cal cal­cu­la­tor” many a poor interpretation would have you believe, but instead an af­fec­tionate, big-hearted, benevolent and, despite all the pressure he endured, an in­trin­si­cally cheerful man – something he expresses holistically in his musical legacy.

It is this essence of Bach as a wise man I want to reveal – even it if may upset the occasional withered or mouldy critic, be­cause this revelation of Johann Sebastian Bach as a human being does not cor­re­spond to his own narrow expectations.